The Vilenica cave, like all caves, is very old indeed! But this one was the very first show cave in Europe, kicking off tours 33 years before the great fire of London.. how about that for old!

It was only very recently that we finally went on the tour here..

Partly cos there is only one tour a week, every Sunday at 3pm between April and end October..

Partly cos there are so many other amazing things to do and see here in Green Slovenia that we had never gotten around to it..

And partly cos we are useless, but after seeing this uberfantastic cave, we really should have gone sooner!

ONE THING you can be 100% sure about though.. knowing what we know about Green Slovenia and the amazing variety and depth (scuze the pun) of caves here, we ALWAYS had this cave on our "TO DO list".. there was never any thought that cos we had been to see other caves it was not worth coming here.. NEVER EVER!

the local cave association do a great job looking after the cave for the rest of the world..

Having been here at last, we strongly suggest you do not wait ten years like us.. especially considering you probably have just a couple of weeks for your hols and therefore just one or two Sundays to shoot at..

Your timeframe will be tight, but lets hope for a tiny spot of rain that day to help push you over the edge and help you make your decision to go for Vilenica!

It is always wonderful when our guests go see "another cave" here in the Green Karst, Europe's Cave HQ.. You see there are a lot of different underground possibilities around here and most visitors have heard of the one big cave, maybe 1 or 2 others, but most guests are completely shocked to know how big the choice of caves to visit here really is!

And it is YOUR CHOICE.. there is no rule that says you must visit just one well known cave on a train here.

For such a tiny country, Green Slovenia sure will make you feel very small with all the huge nautural green monsters here, so it is worth remembering that if ANY of these Slovenian showcaves were in your country they would get top billing..

If the kids want to go on "the train" and buy a baby dragon doll (and there is nothing wrong with that at all), then you won't even have read this far..

Seeing as you have read this far, we will now gladly tell you all about one of Slovenia's most fantastic caves!

crazily beautiful and a little overpowering..

Possibly the prettiest and most colourful cave in Green Slovenia, Vilenica has been looked after by a local caving society since the 1960's, carefully restoring the paths, adding lighting and making it the wonderful community cave it is now.

You might have heard of Lipica, where the Lipizzaner horses come from or the massive Skocjan cave and Vilenica is really close to these, just a 25 min drive direct from Lipizzaner Lodge!

Directions are needed for this one!

After the town of DIVACA, which is the exit for the Skocjan cave, head towards LIPICA and when you hit the pretty little village of LOKEV be prepared to turn right and follow the road to SEZANA.. there is a cave sign and long entrance track about halfway down this road.

The setting for the cave above ground is a very typical Karst landscape. It is overwhelmingly natural and beautiful, with lots of greenery, forest and white rocks scattered all around in all shapes and sizes.

how could you even risk missing out on this hour cave visit!

There is a long driveway up to the car park and you need to be here before 3pm on a Sunday to buy your ticket at the lovely "clubhousey" stone cavers' building.

The scenery is just so beautiful around here that you could arrive early and go for a walk too before or after the cave visit, depending on your logistics.

This is a cave of 1,000 steps, so if you know the kids song "the Grand old Duke of York", be prepared to march down into the cave and then march back up again! So you must have some basic fitness and sadly not wheelchair accessible.

You go down the steps into the huge main natural chamber hall first and this is where the wierdest bit happens, which, sadly, you do seem to get all over Slovenia, cos they make all the foreign tourists stand there as the Slovenian guide drones on and on and on first in Slovenian to the few locals on the tour.

Be prepared as this is 10 -15 mins of your life you will never get back.. it would make so much more sense if the English speaking group got their instruction either at the top of the cave steps or away at the side of the chamber, so the Slovenian group could go on ahead and there would be less waiting for everyone.

But like we said this is not just a Vilenica thing, they even commit the exact same customer service massacre at the massive Skocjan cave.. unforgiveable marketing, but a throwback to socialist times we think!

Luckily the fresh air and beauty of the huge dancing entrance chamber will divert your attention form being totally snubbed and then when the English does finally kick in the adventures begin!

The cave is massive, one km long, with 500m currently explorable and you go 190m under the ground, which is even further in feet and inches!

The cave furniture is spectacular and surprisingly naturally colourful with shiny sparkly whites and yellows, an "ELF cavern" or a "Fairy chamber", depending on your translation and some really big and varied dripstones.

(Use the term "dripstone" if you either cannot spell stalagmite and stalagtite or can't ever remember which direction they go)!!

It is a blast, both physically and emotionally breath taking and the whole thing takes about an hour to march down to the depths of the cave and make your way back up.

There is always a small sense of relief when you see the light at the end of the tunnel and the final steps back into the green paradise as your glasses steam up.

The cave feels huge and if you consider the whole package.. great price, uberfantastic location, history and lack of queues and other visitors, then we think you should seriously consider doing this cave as your only, second, third or fourth gigantic grotto here on your Slovenian adventures. 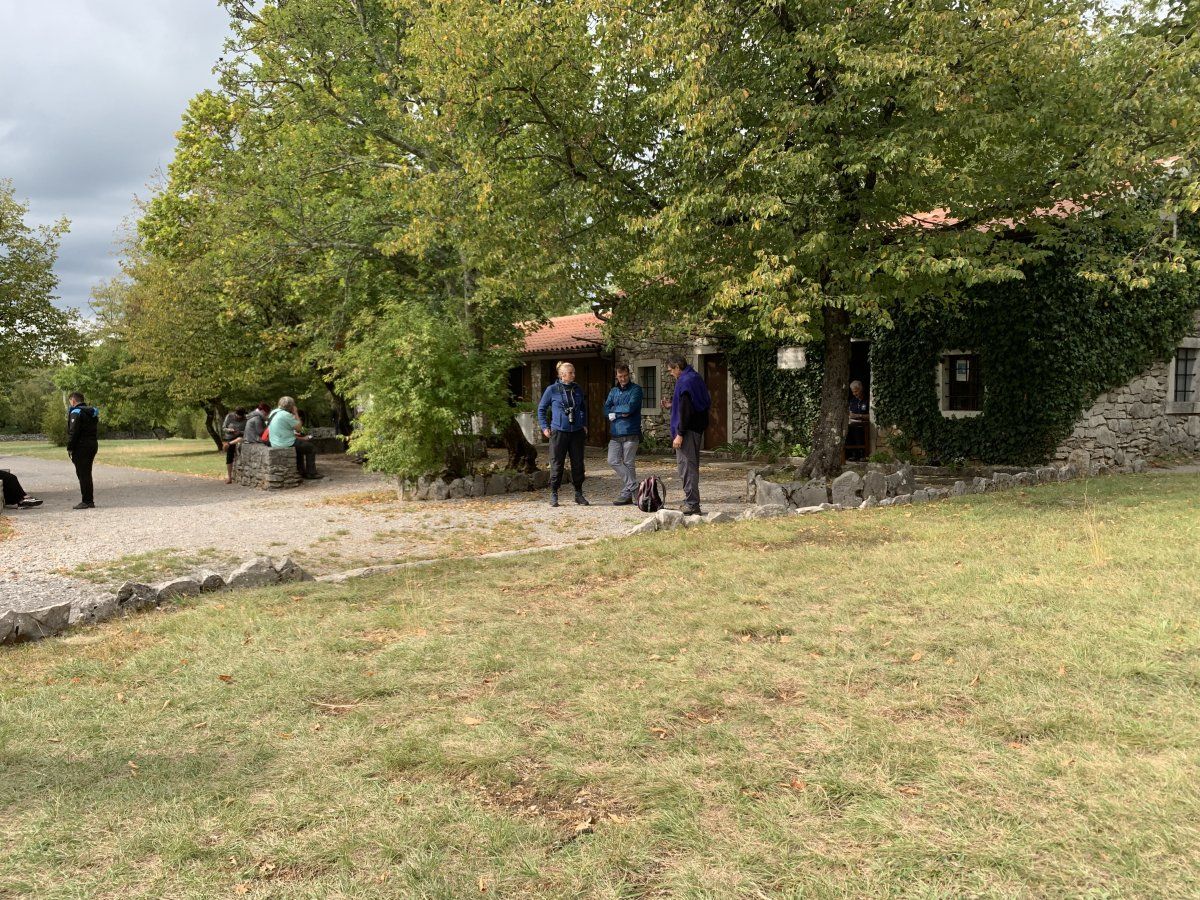 a warm welcome at the stone built cavers hut..

Why not visit Lipica in the morning and head out to Vilenica in the afternoon for the 3pm cave visit and a Super Slovenian Sunday..

A huge bonus and unexpected final tip for you is that nearby Lokev is one of the very best villages in Green Slovenia to go for some lunch before the cave or an evening meal after, with such a large choice of excellent local restaurants for such a small village that you will be shocked!

It will be a Sunday, so one final piece of advice.. you will need to book ahead if you want to eat in Lokev on the weekend as it is overrun by Italians from over the nearby paper border and this is not a bad thing..

You see, it will be a great travel choice to avoid the crowds at other caves, but an even better one to join the crowds of people later from a neighbouring country who really know about where to go for good food!

Vilenica cave is a traditional and local rock wonder of the world in the bosom of the beautiful Slovenian Green Karst and like so many of Slovenia's natural wonders, it is sure to fill your head with rocky Karst memories that you simply could not ever believe or imagine before coming here and seeing it with your own eyes and breathing it in with your own lungs.. Suck it in and enjoy and don't forget.. SUNDAYS, 3PM!