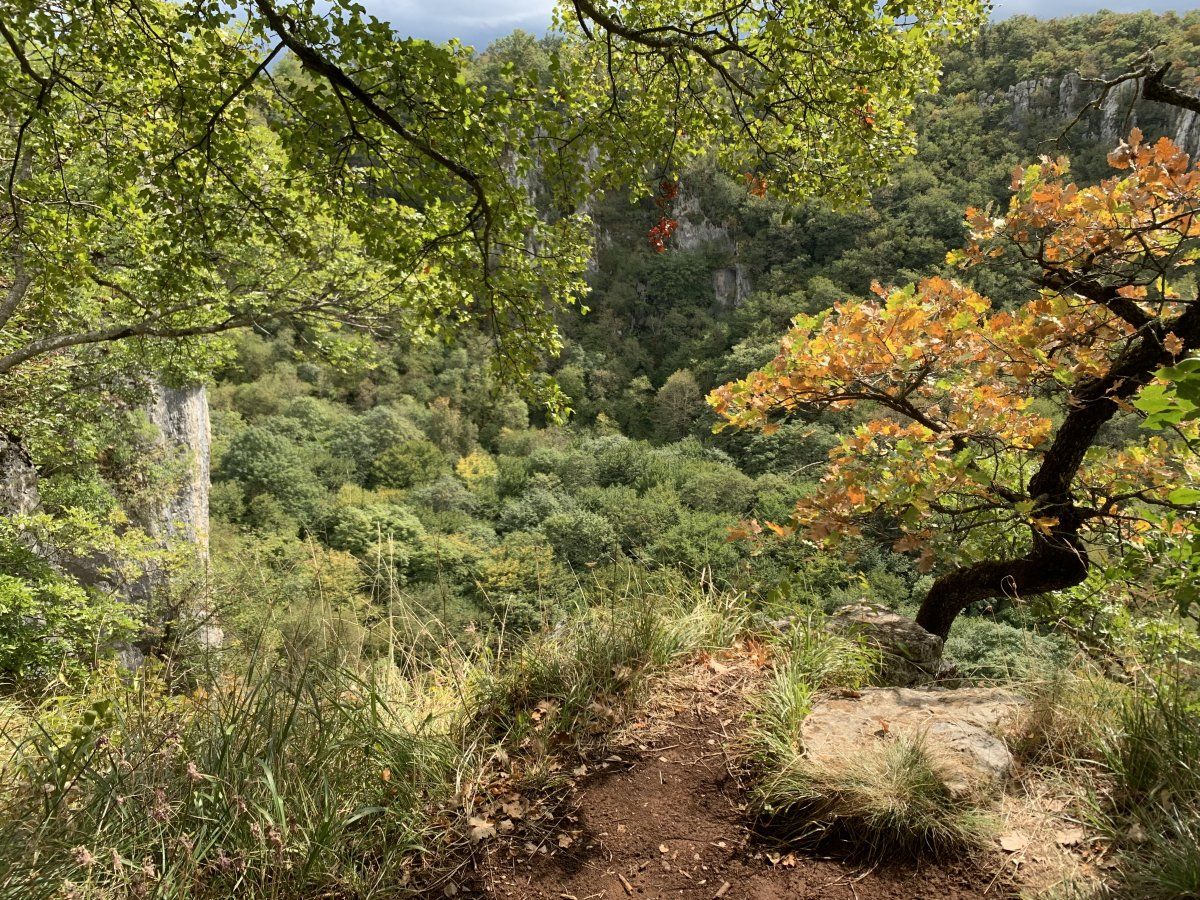 This massive Karst sinkhole is yet another uberamazing natural Green treasure to visit and ticks lots of boxes to be included on our Secret Places to Visit list! 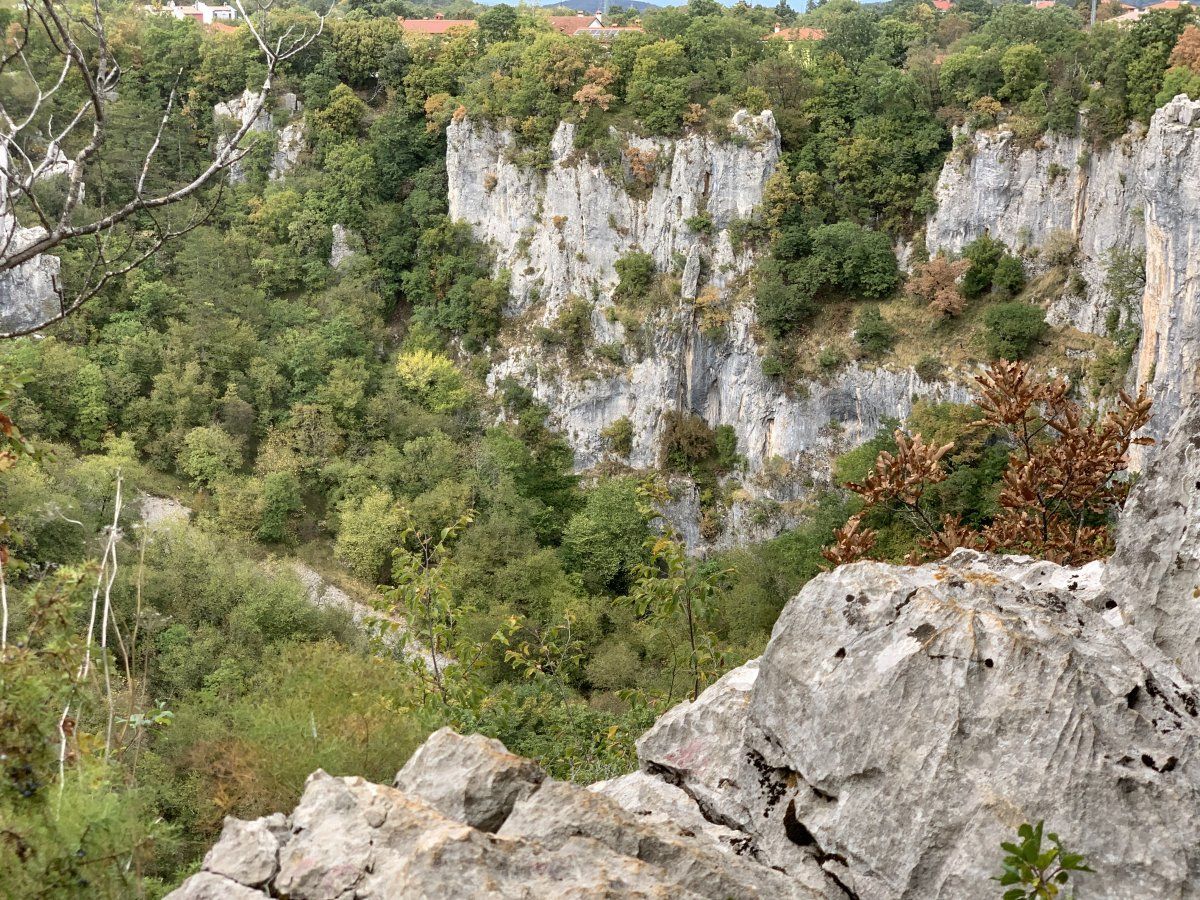 lots of view points on the way around the top of the crater rim..

The Risnik Doline as it is known locally is a massive hidden crater or "sinkhole".. and a perfect & powerful example of some of the OTHER KARST STUFF we have here all over the place in Green Slovenia.

You can learn more about what the GREEN KARST actually is in our longer blog on the subject.. but briefly.. half of Slovenia is covered in leaky limestone features that create the caves and mountains you might have heard about and will see here for sure, but also the lesser known Disappearing Lakes, Rock Bridges and these Sinkholes, (technical Karst term is Doline or Dolina), of which the Divaca Dragon's Crater is a very large example indeed! 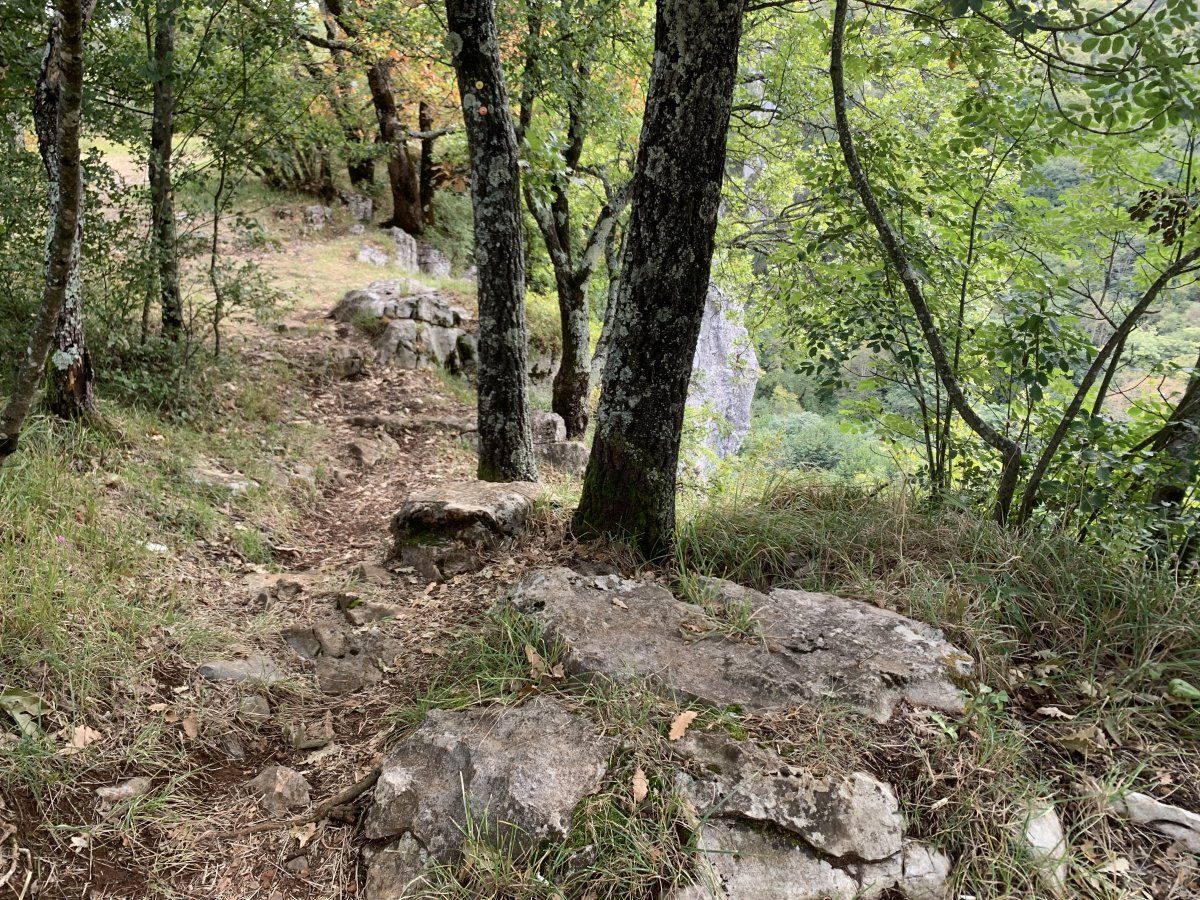 the start of the clockwise track from the little car park.. watch your footing..

So here is the Simple Plan of Attack for the Dragon's Sinkhole!

Find it, Park up.. very carefully. Do a lap of the crater rim along the designated path. Enjoy the views and creep to the edges where you dare. Job done, will take about an hour!

This sinkhole was formed millions of years ago when the massive cave roof likely collapsed to make a circle crater that any space meteor would be proud of! 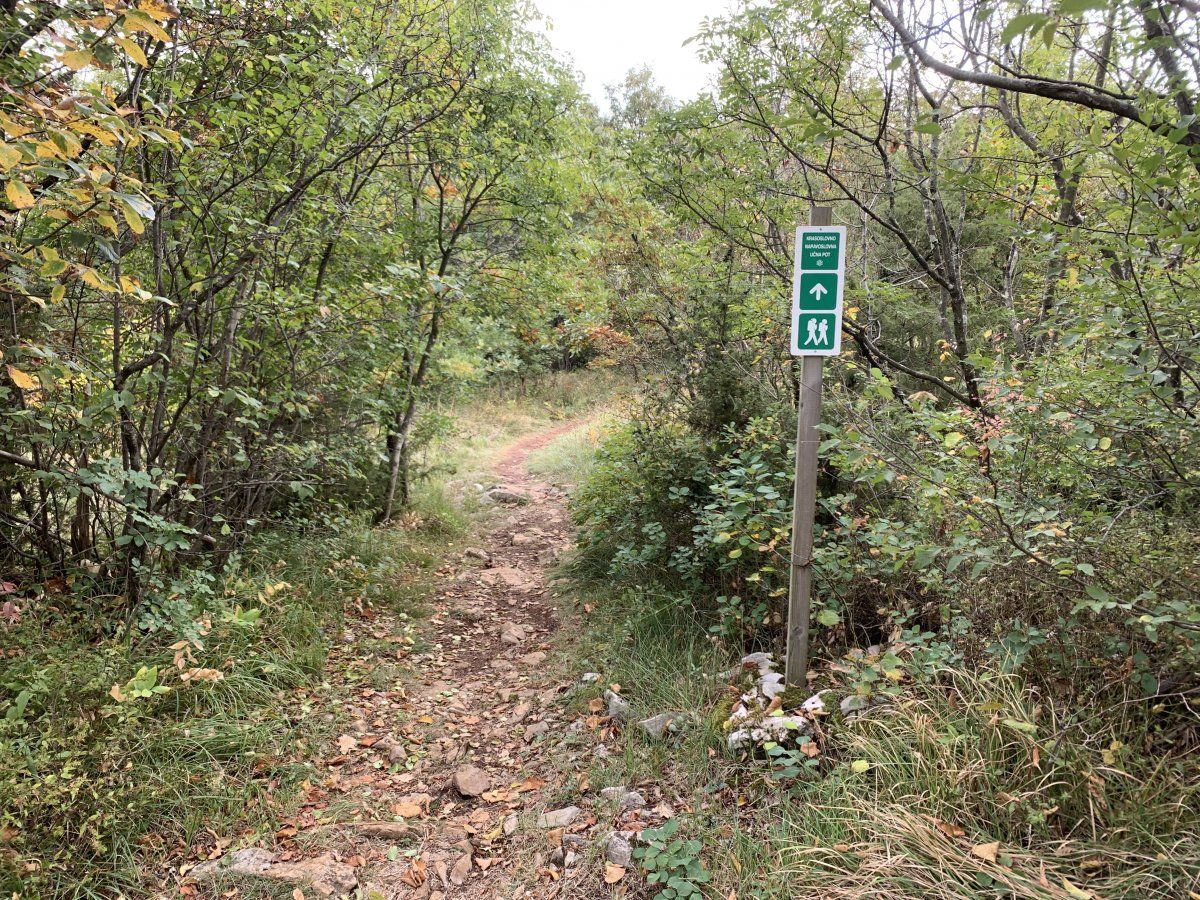 at least the hiking track around the rim is marked and sometimes heads away into the grass meadow or forest for a safer line..

The sheer size of this place and the fact that it is just yards from the main road will take your breath away!

It is so easy to miss where this sinkhole is.. so we will give directions.. upon leaving DIVACA, follow direction LOKEV and LIPICA, then look carefully for that little car park on your left.. Years ago there was a sign, but recently nothing. Park very carefully  indeed and maybe leave your nose pointing front so easier to get out when you leave.. definetely apply the hand brake!! 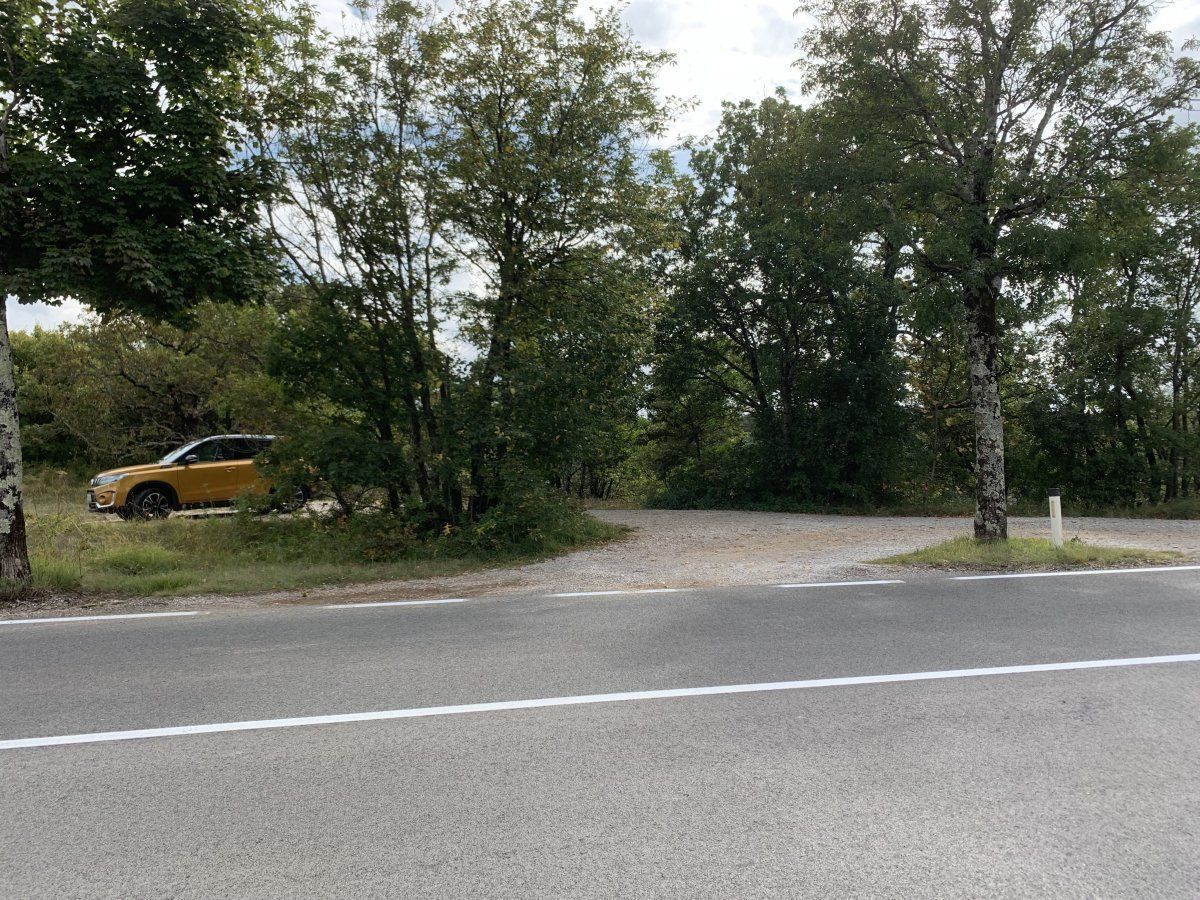 this is the tiny car park, turn left when leaving DIVACA direction LOKEV and LIPICA..

This wonder of Karst nature is actually just a stone's throw from one of Slovenia's Unesco protected attractions, the Skocjan cave and like we said just off the main road to Lipica where the Lipizzaner horses are.

Most of our guests manage to fit in a visit to Skocjan cave and from near the visitor centre there you can actually do a short hike to look out over the second biggest hole in Europe!

But you cannot walk around the Skocjan rim as easily as here at the Dragon's Crater just a few km from Skocjan, so the Dragon's crater is a much simpler and quieter option to explore around.

You might also like to know it is also really close to two other spectacular lesser known Slovenian show caves that have tours just on Sundays, the Divaca cave and Vilenica cave.. Actually, this crater does have a Sunday kinda feel about it! 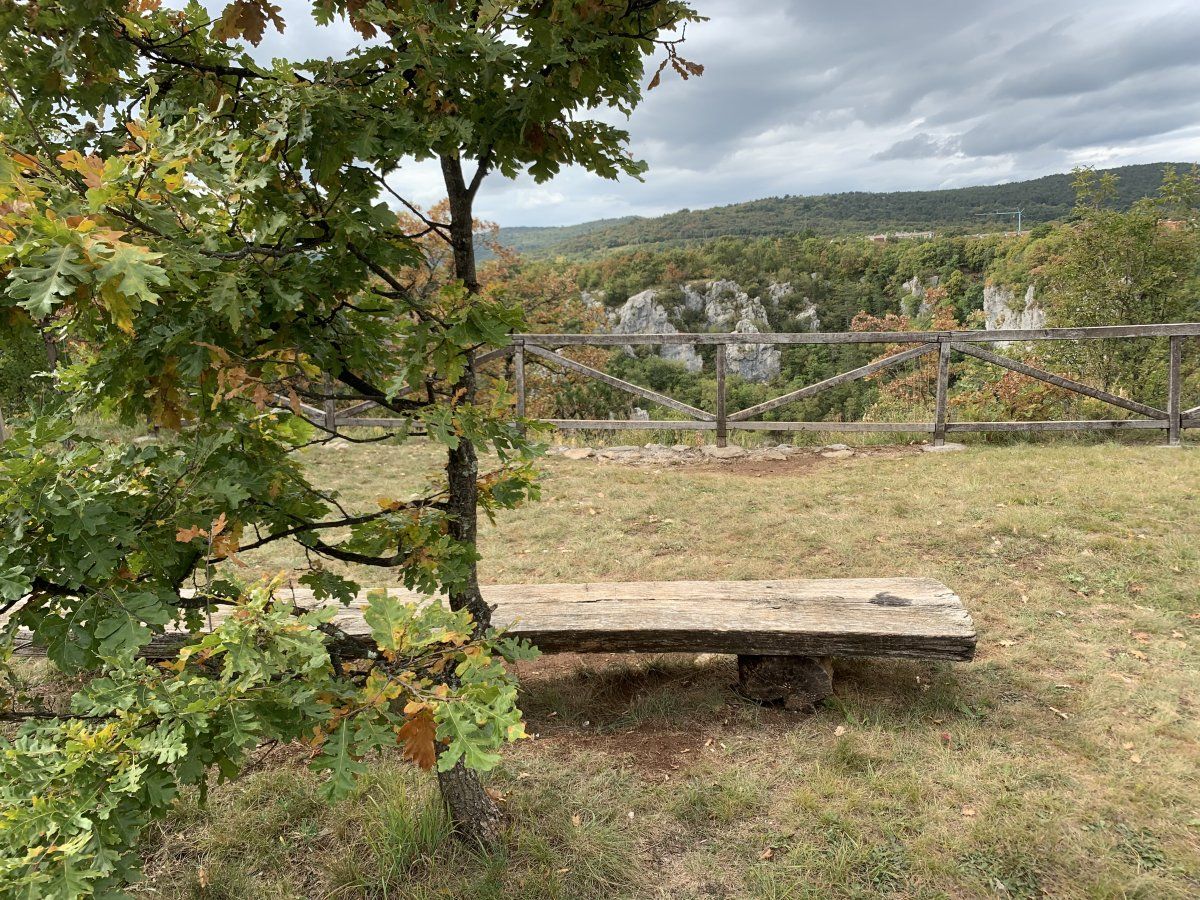 a secret place to come walk, sit and admire..

What is a holiday without a little bit of danger or a few butterflies in the stomach?! This crater could be dangerous if you are not careful.. but if you are careful then nothing to worry about, but if you have small kids you will certainly need to keep them on a leash!

This huge sinkhole is already known in climbing circles as a great place to train and there are metal pins installed in some of the cliff faces. For a climber the crater must be perfect with no wind and high straight cliffs!

For most of the rest of us we can get quite enough adrenaline just hiking around the crater rim and the good news is there is a path to follow all the way round. 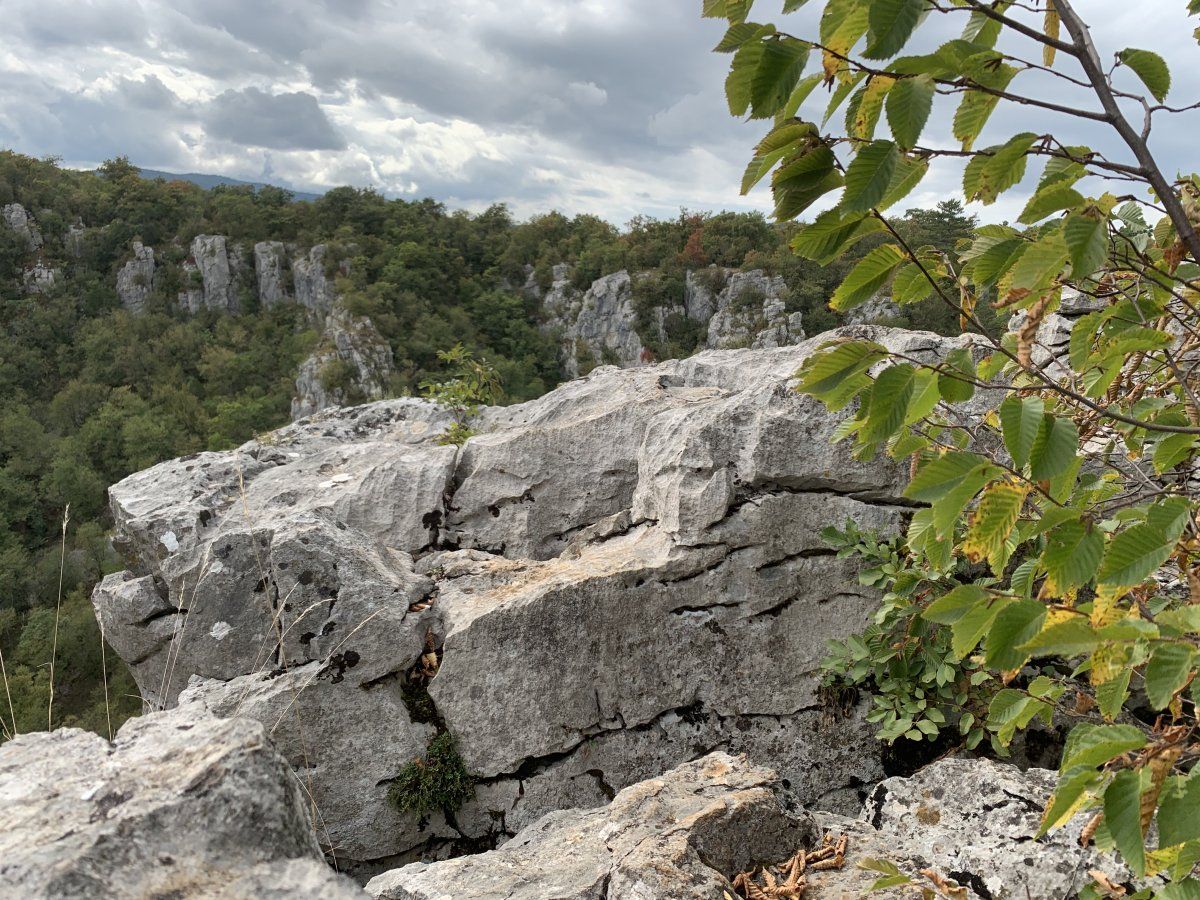 It doesn't really matter which way you go, but we would suggest clockwise from the car park and your car is at 7 "O" clock.. the best viewpoints are between 11 to 1 "O" clock!

There are a few path signs to follow, but the track is quite obvious and does head off into a side meadow for just a bit, so don't panic, the cliff edge is quite dangerous by there, so good to follow the path and bypass that bit!

You will get lots of chances to nudge nearer to the rocky edge for better views and to take some pics and where it is really dangerous there are wooden fences.

If you hurried, then a 30 mins would be enough to speed around the circumference, but why the rush?

An hour would be more reasonable and there are a few wooden seats to use for a picnic to enjoy the majestic views at the far end of the crater. From here at 12 "O" clock you can see across the "whole hole" and see how tiddly diddly the Divaca houses look on the other side in comparison!

a sheltered paradise for rock climbers too..

The sheer scale and shock of this Karst meteor hole is awesome and you could spend all day in this mini region walking for miles in the neighbouring forests, biking on the numerous stone tracks or maybe visiting one of the other caves nearby.

There is a scree slope going down into the crater at about 4 "O" clock, but we will ONLY tell you about this when we have done it ourselves and if we think it is safe to do.. but it sure is tempting to get down there and explore the crater floor!

Did we say "be careful" enough times? OK, now go enjoy one of the BIGGEST secrets in Green Slovenia!