the cloud in the cave & Rapunzel's tower 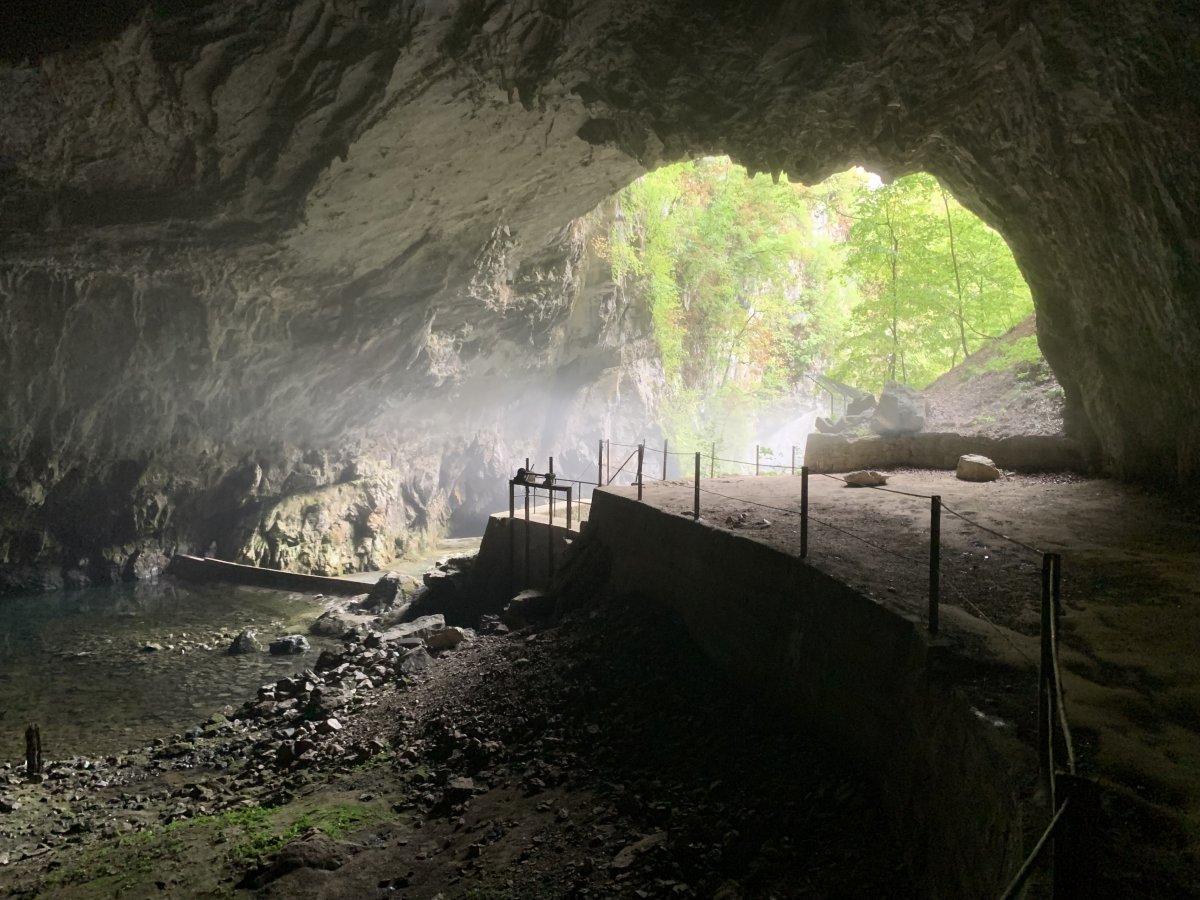 Well they do say Green Slovenia is the land of fairy tales..so you shouldn't really be surprised that just 15 minutes from Lipizzaner Lodge you can find Rapunzel's tower.. oh yes and a cloud in a cave!!

Many of our guests whizz off on the beautiful old green Roman road that cuts the corner and avoids the motorway to so many amazing secret places close to here.. the biggest disappearing lake in Europe, or Sneznik (Snow Mountain) castle, or to the Mercury mine in Idrija, or the amazing Krizna Cross cave.. to name just a few, but this page is not about them!

Now we want to tell you all about how to find another fantastic green cave that sometimes has a cloud and a fairy tale tower that are an easy hop off during your daily adventures.. if you only knew where they were!.

The old Roman road that runs from our little village of Landol towards Predjama castle and then out to Planina, (where these green secrets are), was used as the best route from central Europe past the Alps into Italy.

In later years, carters used this road to transport huge oak trees from the thick Slovenian forests to make the foundations of Venice and later to build the masts of the big ships at Trieste.

the cave mouth could easily fit a London double decker bus, but check out the amount of rock above!

Nowadays, just 15 mins along this road, directly from the Lodge, you can find a tiny little car park in Planina and walk down a little path into the forest. You go through a metal gate that could easily be the entrance to the "Secret Garden". Walk down the track and cross a creaky wooden bridge that crosses a thunderous river..

The sound of the river builds as you walk along the track to the cave and then you see the massive mouth of the cave under 40-50m of rock, with the water gushing out.. it is a sight to see and hear..

This is Planina cave, (Jama), perfectly visitable during the summer at 5pm every day, but pretty much unknown to visitors. We cannot recommend a visit here enough! 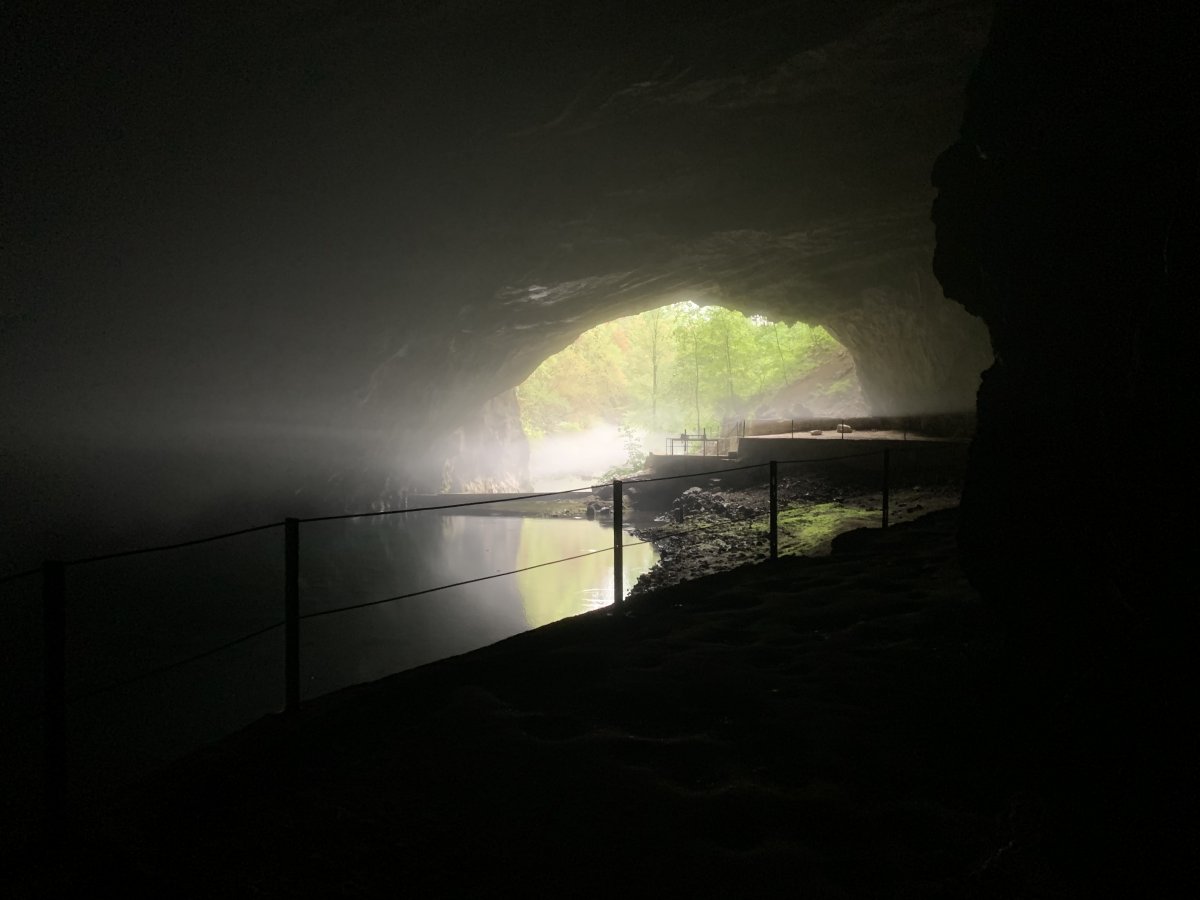 you can always go about 100m into Planina cave on your own to see the cloud from this sensational angle..

If you are not in time for the tour, then as a minimum you can walk a little bit into the wide mouth of this cave to explore a bit until the metal gate where the tours start from..

The stunning Unica river pours out and this river is another completely amazing phenomenon of nature too.. the water coming out of this cave is a mix of two rivers, one of them is the same one that goes through the Postojna cave. 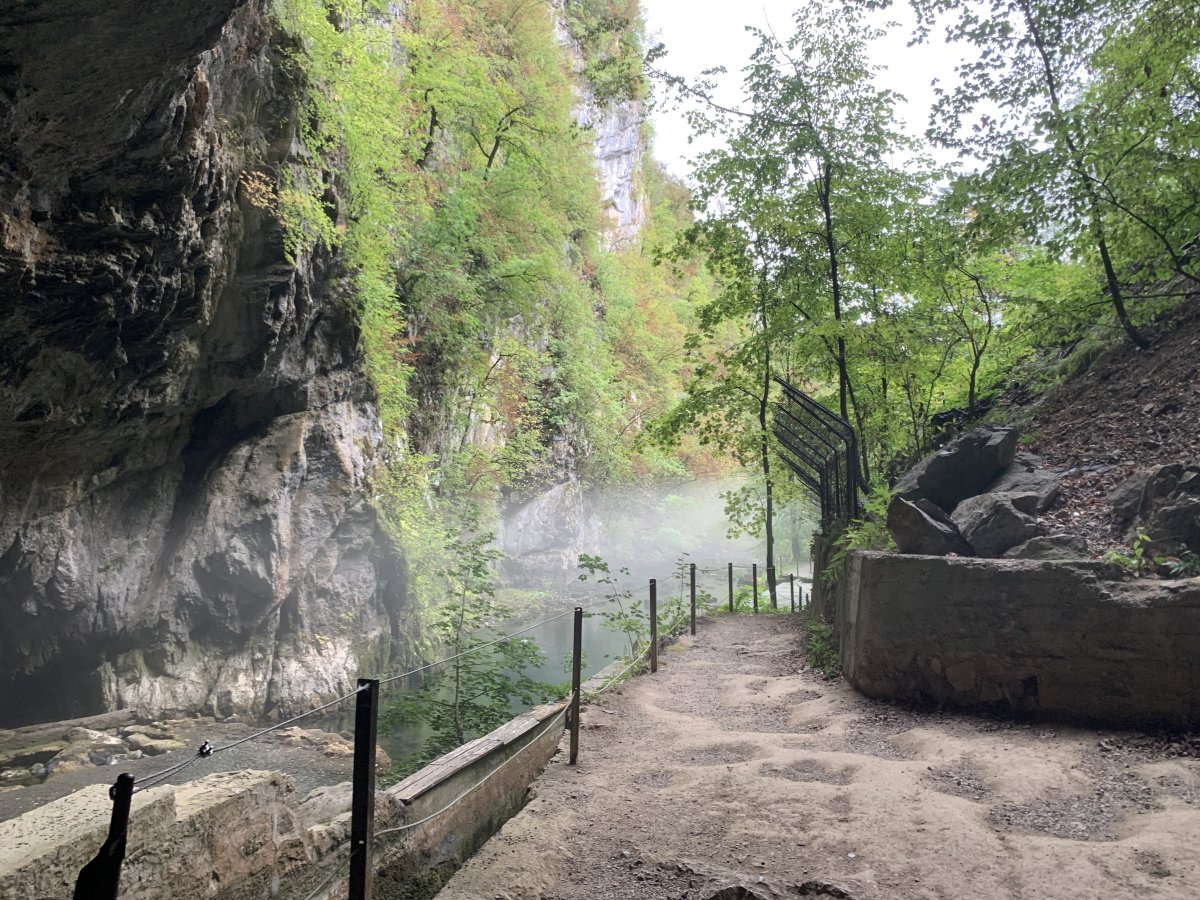 the cloud floats off down the brand new Unica river..

The river is generally called the "River of Seven Names" as it disappears underground seven times on it's long journey and gets a new name every time it reappears!

And the Planina cave is the only cave in Europe where you can see two rivers crashing into each other underground and at the mouth of the cave if the weather conditions are right, then you might also see a mysterious cloud floating around too!

Back at the car park you can walk down the road a little to find a tower right out of a fairy story.

If you were an evil witch then the Ravbar tower (Stolp), as the tower is officially known as, would really be a jolly good place to imprison Rapunzel! So we call it Rapunzel's tower and hope Slovenia will realise what an amazing tower they have here and open it to the public.. currently you can only gaze up and see if you can spot Rapunzel's hair at the top window of the tower!

the river is at the foot of the tower road and the stone track leads off to Planina..

The grounds of the tower are being repaired in 2022, so we totally hope this will lead to visits being allowed.. we will let you know and are excited ourselves to climb up and see the view that soldiers would have had years ago to spot enemies and smugglers sneaking around!

Kids will love this magical place as a stop off and imagination builder and adults will marvel at the beauty of this lush forest area with river pouring out into the green meadow.. All this area was controlled by the tower in the good old days.

on a hot day the water fresh from the cave would be very refreshing for a dip!

If you stay on the little road and walk down, it brings you to the river and another picture perfect piece of Slovenian Green paradise.. It is also a great place to cool off on a hot day, but beware of the power of the water!

The Unica river is also one of the finest rainbow trout fisheries in Europe where remarkably, the trout swim up the river. Permits are available in the village of Planina, but walking along this beautiful river is for free.

You can also access the river from the old bridge on the road to Cerknica and by doing this you are ALSO crossing one of Slovenia's biggest disappearing lakes!!.

Yes, in the autumn the water flow from underground caves and passages all over the place super power the river to completely flood the water table and fill the huge meadow next to Planina and form another of Slovenia's magical disappearing lakes, (full in the winter, empty in the summer).

The lake stretches for kms and you can see the water line where the houses are positioned just above it in Planina, with centuries of knowledge about where to build a house here!

this water from the cave can fill a massive disappearing lake..

If you are here in the summer then the water in the lake will very likely be gone and the river coming from the cave might not be so powerful, but you will get to enjoy a huge unbelievably green and lush meadow instead, buzzing with butterflies and flowers.

So now you have an idea of what green treasures you might be missing just here in Planina, you can see why we do our very best to explain this to our guests who might be interested in finding the cloud with the cave!

it just has to be Rapunzel's tower!

If I was Rapunzel, firstly it would be great cos I would actually have some hair, but secondly, I woud not be in a hurry to escape the tower.. there is just so much green nature to see and experience around here!