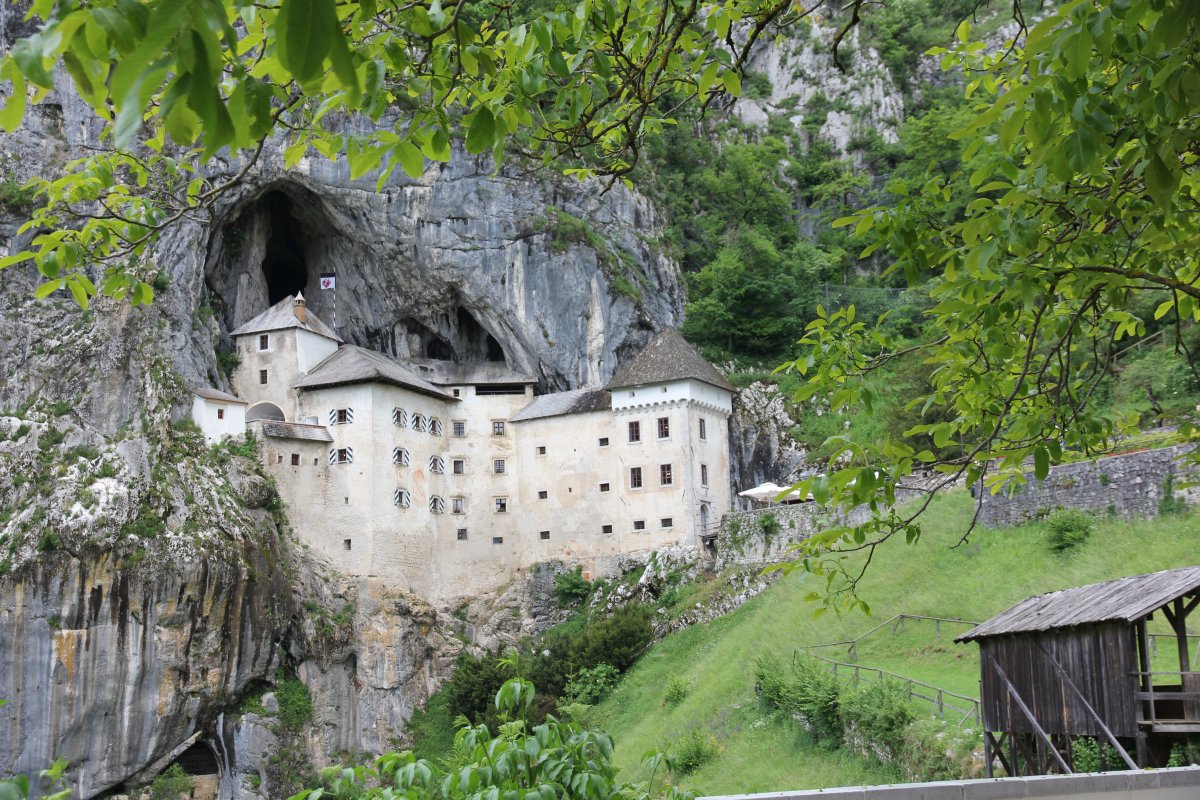 We heard that a Netflix fantasy show had chosen Predjama castle for filming shots of the thrid season of "the Witcher", so Chris jumped on one of our E Bikes and sped down the Secret Path Forest Path to Predjama Castle to take a peek!

To be fair, we don't have time to subscribe to Netflix, so a quick internet check left us shocked that this was a mainly British cast for a show we had never heard of! It does seem pretty popular though and is the kinda of show one of the Lodge team would deffo watch!

With the amazing number of secret palces we know around Green Slovenia we are not surprised in the least that a big TV show has finally discovered the magic and beauty of this tiny country containing everything that is great about Europe in one little box for filming.

The only really surprising thing is that more shows have not been shot here as there are secret fantasy waterfalls and stunning rivers and lakes ALL OVER THE PLACE! The caves are just Lord of the Rings, there is a Kozjak Waterfall that should be straight out of the Hobbit and castle after castle that would have totally graced Game of Thrones! 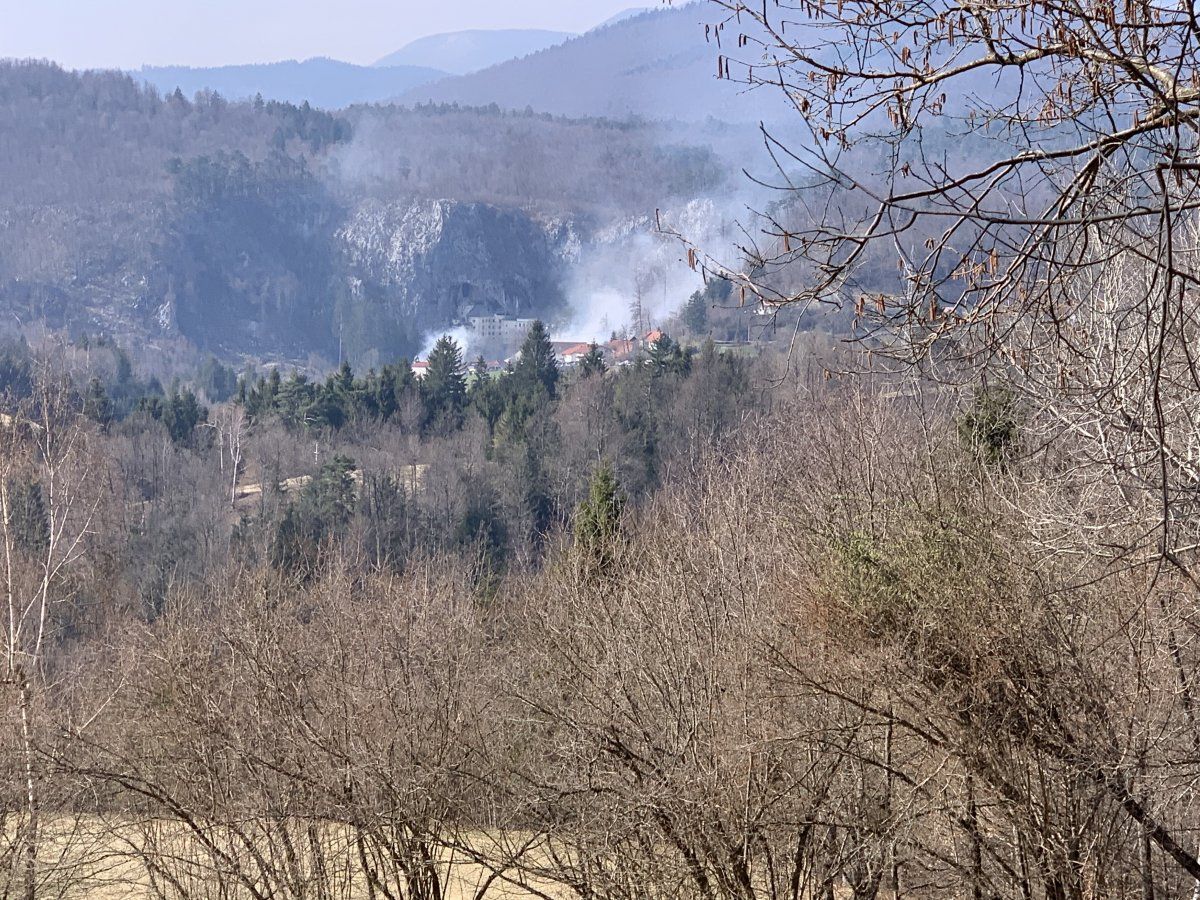 Birds eye view of Predjama castle on the day of filming..

Anyway, one of, if not the THE most beautiful castle in the world is just a 40 min hike or a 10 min E Bike ride along a secret forest path, but not far into the forest, near the castle I found a sign on the path in Slovenian, prob saying the road was closed. So I cycled a bit further to get tantalisingly close to the castle, but still around a forest bend and here I saw a bigger barrier closing the road and some kinda security car.

So I turned round, but all was not lost and I was determined to get a glimpse of the largest cliff castle in the world on the same day of filming, 4th April 2022.. (we know lots of local secret places where you can do this), so with the power of the E Bike to help, I whizzed back up the secret track to another spot where you get a clean, clear, but distant view, above the tree line of Pyjama castle nestling 70m up a 121m high cliff..

Just like magic, the castle appeared shrowded in smoke and with the camera zoom you could get a closer view, much clearer on the eye than in the photo, so here are a few shots below to proove we may have actually "watched" a bit of the Witcher.. at last! 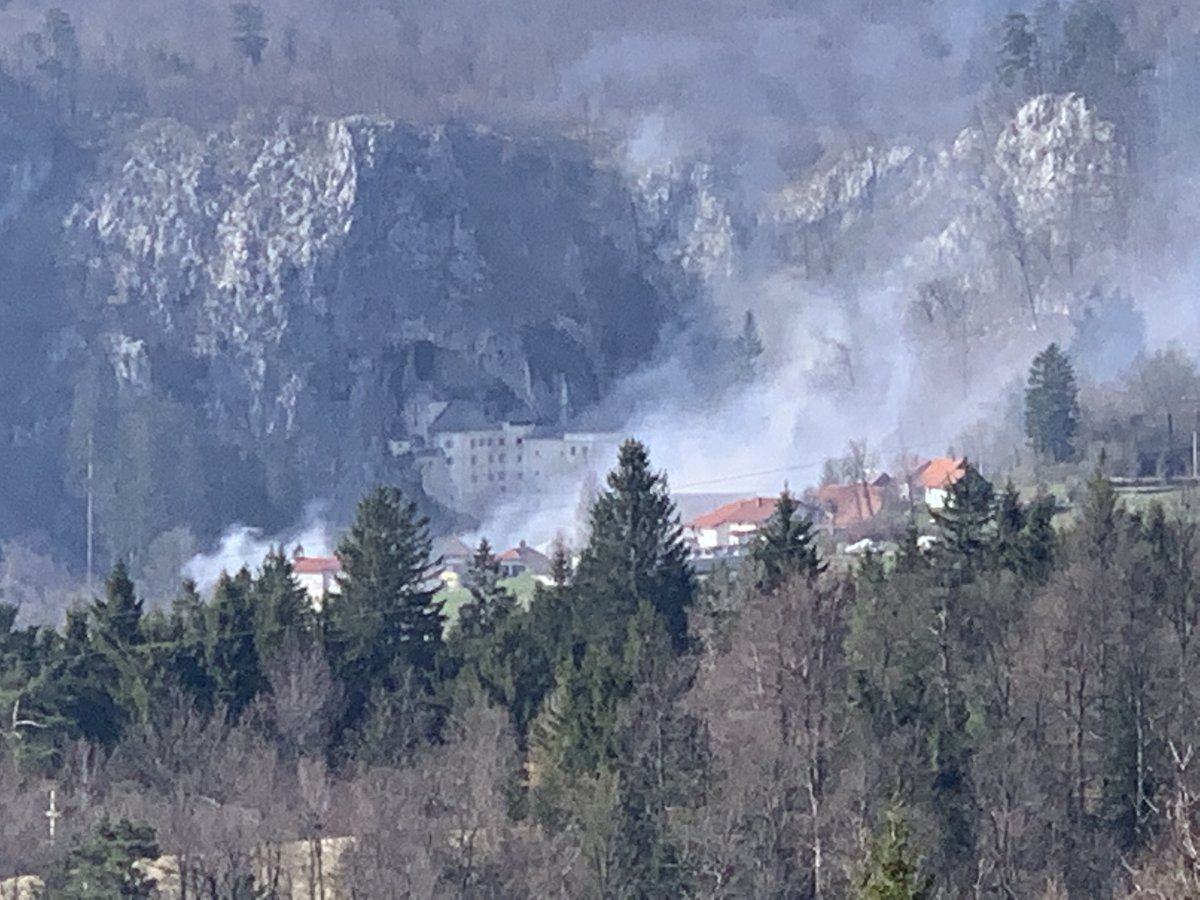 Castle close up on max zoom..

As I pushed the bike back towards the road, a car rolled up and edged carefully onto the tiny secret forest track and a couple got out.. We soon got talking and these guys were genuine "Witcher" fans!

They had been circling the best defended castle in the world all day and this was their last attempt to get a good look at the castle, so I congratulated and left them in peace as they got their telescope out and settled down at the top of the hill to have a look!

The purpose of this blog is NOT to try to defeat security or discover any spoilers, (so sorry for mentioning the smoke, but we guess there is a lot of smoke in the Witcher anyway)? Our aim is to celebrate the fact that Green Slovenia will be appearing on the small screen once again on a world stage.. those superfans told me the Witcher had also filmed here the day before on top of our local Mt Nanos, which should look amazing on the telly.. maybe you will see the Lodge from the top of there!! 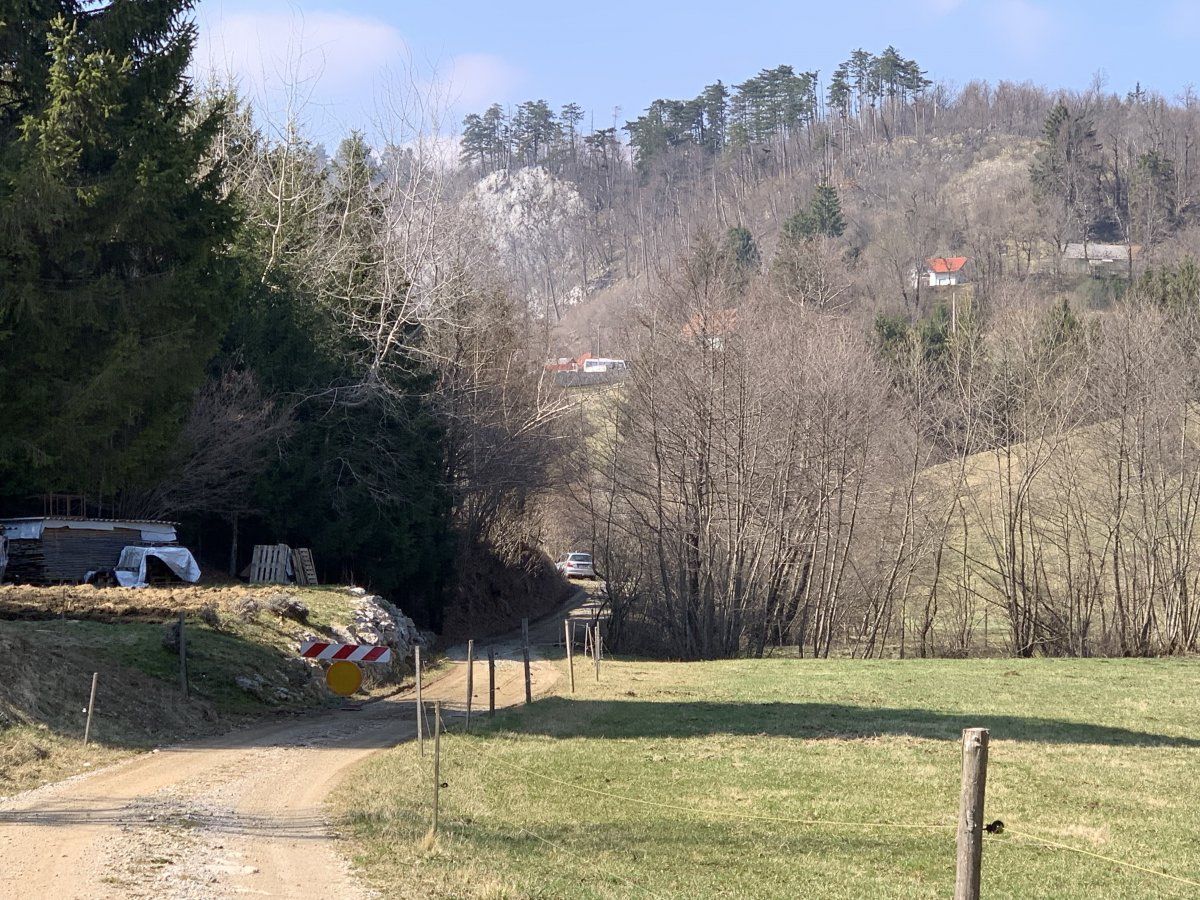 track closed.. the castle is a minute from here, just around the bend and then 70m up in the side of a massive cliff..

(We know several other even more secret forest routes to the castle that could not have been sealed off and especially one that leads to a field where you can get a fab close up side view of the castle, but this was not our aim for the day).

To date, only Jackie Chan has discovered the magic of Predjama castle for a movie.. The second Lion Witch and Wardrobe film, Prince Caspian was filmed on the uberbeautiful Soca river, but considering the amazing beauty of this small country we hope that more films will be showcased here.. Let's face it, it will give the special effects team a bit of a rest! 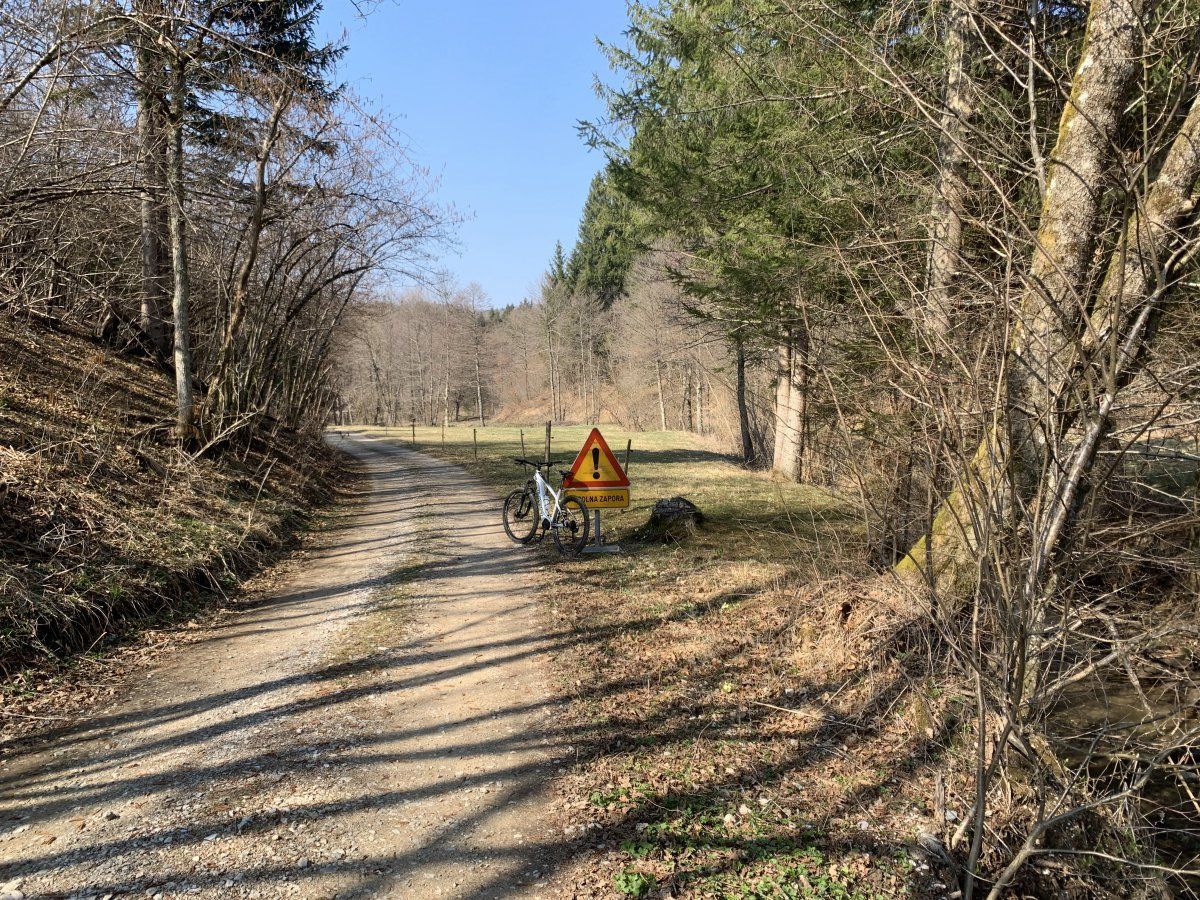 the first sign, not sure what it says, but prob warning the road is closed ahead..

And finally, here is a link to our "Local Legends" page where you can find out a little more about some of the fantastic local super heroes that have so far been ignored by Hollywood..

There is loads of material here.. a boy who was given super strengh by a beautiful fairy he protected from the sun, a smuggler "Robin Hood" character with a big axe who could carry his own horse in the forest to avoid detection and saved the Austrian Emperor from the Ottoman threat AND Predjama castle even has its own true legend, a cheeky knight, who would make a great film character, as he holed up in this castle for a whole year gorging himself on cherries and throwing them off the battlements at the starving army camped outside for a year! 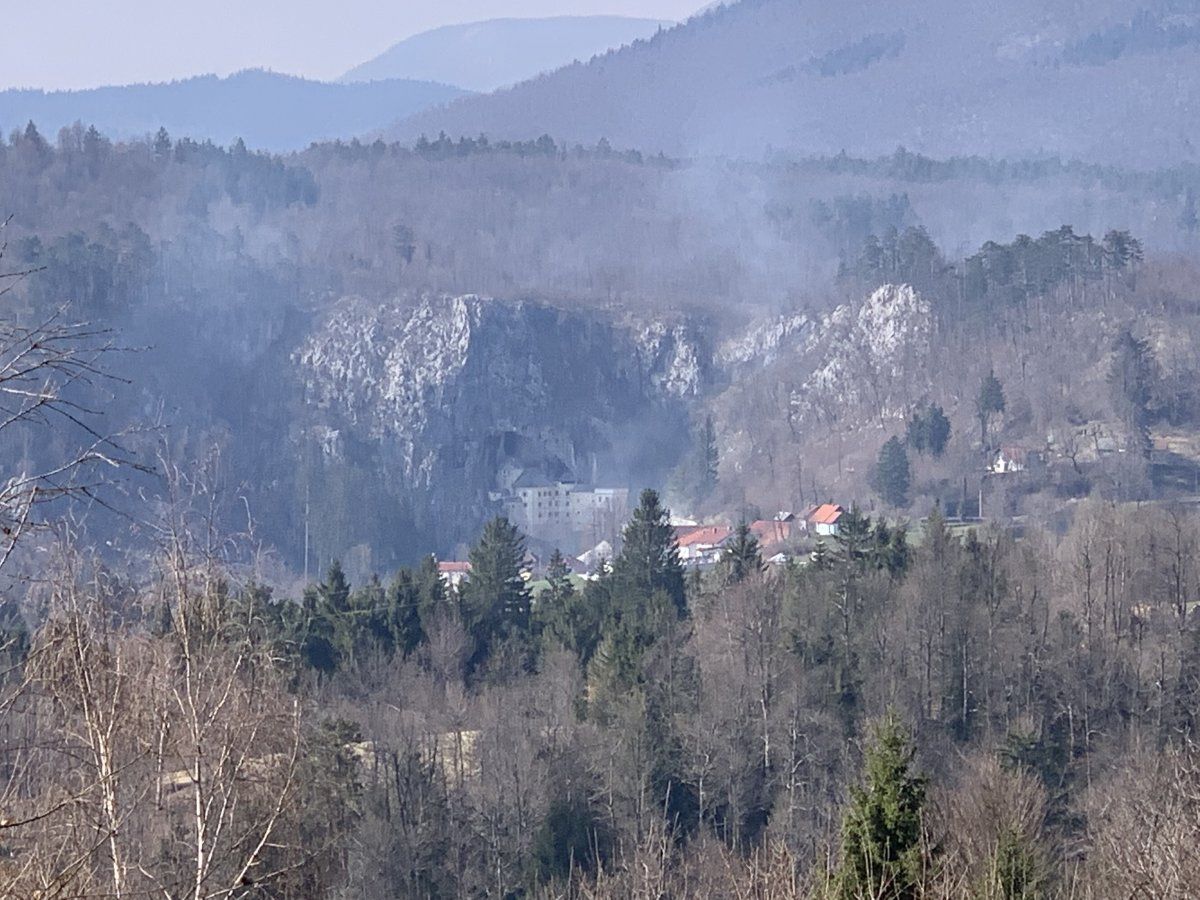 Just one of the many magical places in Green Slovenia to shoot a movie..

We hope they had a great days' shooting and we look forward to seeing the footage, some time when it gets onto regular telly!

And if they ever want to film "the Twitcher" instead of "the Witcher", then Green Slovenia is still the place to come as Cerknica, the Biggest Disappearing Lake in Europe has more than 50% of all European bird species at just one massive pool of water!