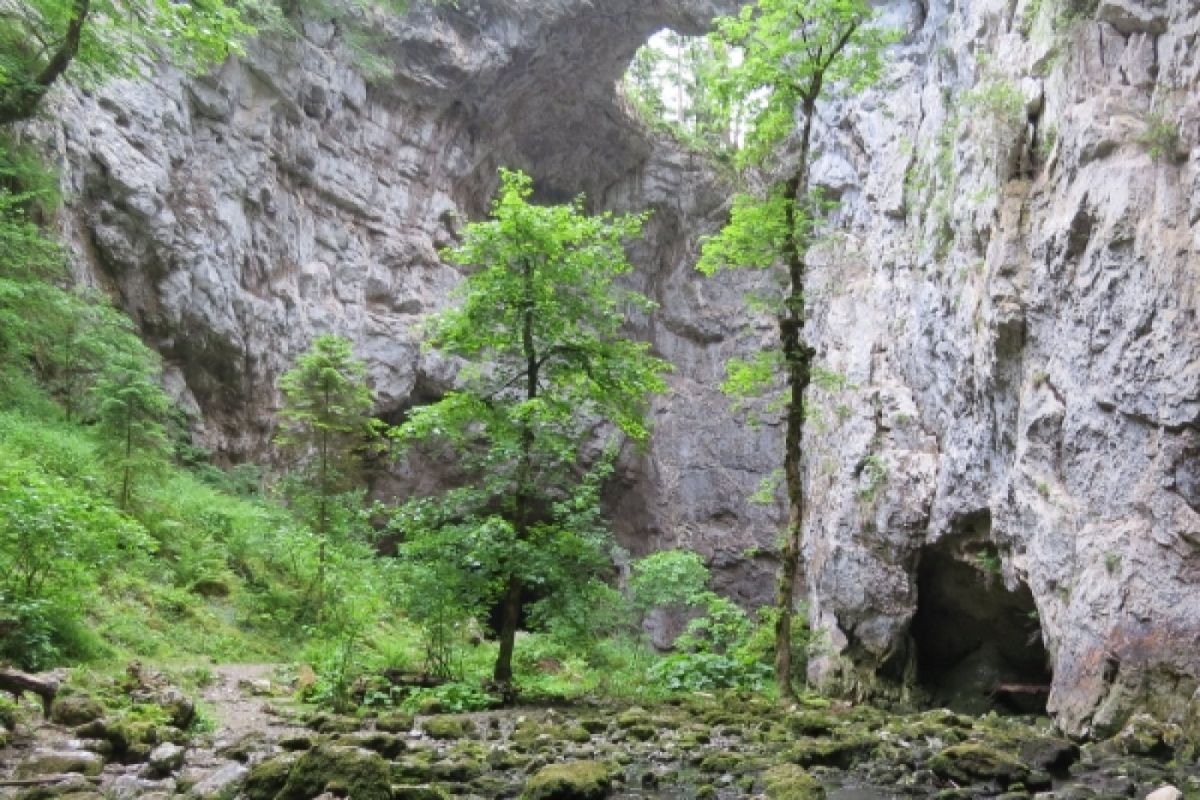 Imagine an incredibly beautiful nature park about 5km long, packed with caves, rocks, thick with forest and with two massive natural stone arch bridges at either end. The whole package created millions of years ago when a huge prehistoric cave collapsed. Oh yes, did we mention that a stunning river also flows through the middle?!

Picture this park with a lovely walk down into the prehistoric cavern, a place that time has forgotten, where you could easily imagine dinosaurs flying around overhead! You get into this green, stone covered rocky wonder by hiking down a small hillside path into a huge cave and then you need to find a smaller secret cave door that will bring you to a stone bridge that belongs in a fairy tale. cross the bridge and walk next to the burbling river which brings you underneath the very stone arch you were admiring from up top, but now you are 60 metres below it, looking up.

And finally, did you know this enchanting natural treasure is just 20 minutes from Lipizzaner Lodge and only 15 minutes from the most visited tourist cave in Europe?.. Not many people do!

Introducing the "Notranska Nature Park", known locally as "Rakov Skocjan", but we will simply call it the 2 Stone Arches Nature park!

The thing that really surprised us about the 2 Stone Arches Nature Park is that we had been there several times over the last 10 years to admire the stone arches, but we didn't realise 1) how much more there was here to see, 2) exactly how close we were to the hidden valley and 3) how this amazing park is  "the bit between the two fabulous arches"! It was only when I showed a friend a TV Mini car advert that I had noticed featured Slovenia, that he told me the stunning bridge in the ad was actually here at Rakov Skocjan! So, as you can imagine, the very next chance we had, we legged it to the park and followed his simple instructions how to get into the valley and we could not believe that several times before, we had been just metres away from finding this secret paradise!

Now we discovered and explored the cave floor, with the dark green river gurgling over the ancient rocks and I just mumbled to myself, "oh my God, this is another direct entry into our Slovenia top ten"! You don't realise until you are down here, but you will clearly see how the smaller stone arch was part of the roof of a massive cavern. There are mini and massive caves all over the place here as well.. it's one of those really special places where your view changes with every step.

What's more, the park in general has had a recent hiker's makeover and you can follow a new wonderful woodchip path for the curvy 3-4 km between the arches. there are also some wooden posts for directions, so you can find your way between the two arches, but you still need to be a little careful if you wander off the path, as it's a bit like being in the jungle.. a couple of wrong turns and the very beautiful forest, with Karst stone features everywhere can trick you into getting lost! What you need to know:

You should do a 2-3 hour visit, driving ,parking, hopping out, then exploring to see each stone arch and then spending most of this time getting to and discovering the secret valley OR spend the whole day hiking between the two arches and back, but if you try to hurry here, you will miss more than you see.. (even with good directions you can easily go straight past some of the best secret bits, just like we did so many times before)!

The 2 arches are called Big Bridge (veliki Most) at the start of the park and Little Bridge (mali Most) at the other end or "top" of the park and they are about 3-4km apart and connected by a river, which is by no means straight. The secret valley is hidden directly under the little bridge.. once you have explored and walked over the little arch, (which, by the way, is only called "little" as it is smaller that the massive big arch) look down and you will see this prehistoric wonder below.

The arches are stunning, but the open cave under the smaller arch is utterly spellbinding and breath taking. You need to walk down a steep , curvy hillside path which starts close to the small arch to get to this cavern and the entrance is through a dark river cave where you need to hold onto the side of the cave wall to keep your balance. If the stone path is wet you need to be VERY careful walking down to the cave as the stones can be slippy even when bone dry in summer! This is not a flip flop destination! There is also a curvy, dusty stone road connecting the bridges and if you wanted to spend most of the day exploring the park and nature then you should park at the top or the bottom of the park and walk from one arch to the other. Use the riverside and the road for navigation, but if you have time and please make the time, then you can follow the fab woodchip purpose built nature path.

There is also a 70's style hotel on the road, pretty much in between the 2 arches. Apparently this place was rocking (excuse the pun) during socialism, but times have changed and incredibly it has been left deserted for years in one of the most fantastic places to visit in Slovenia!!! Anyway, the good news is that it has reopened, (we think only as a restaurant), but at least you might be able to get a beer here or something to eat along the way.. just in case, please make sure you have plenty of water for your adventure.

And our last tip is that the time of year or weather will decide if you can swim in the river, walk over the stones on a dry river bed or even get down into the secret valley.. one final thought.. imagine this enchanting place glistening in the sunshine under snow!

the River of 7 Names

This is not just any ordinary river here at Rakov Skocjan either.. the river is named Rak and is a beautiful section of a much longer river that starts near the southern Croatian border and goes through & past Ljubljana, but along the way it ducks underground and every time it pops up again (7 times) that stretch of water gets a new name.. hence the river of 7 names! Before it gets to the stone arches it also passes under the largest disappearing lake in Europe, Lake Cerknica for good measure!

And depending on the season or weather, the river Rak can also disappear itself, leaving a rocky green slimy paradise to explore along the river bed. This summer was very dry, for example and it was the only time we were ever able to walk under the big arch and explore along the huge cliff walls that line the river. We made another discovery this time as well, seeing more clearly how the river route runs between the 2 Arches and through the huge Weavers Cave. Most of the time there is water gushing under this huge arch, swelling the river and sometimes flooding the lush green meadow below. The 2 Stone Arches Nature park is just another of the multitude of incredible secret natural attractions Slovenia doesn't boast of, but should be singing about to the world from the top of a nearby mountain! Pretty much none of our guests have heard about it, but everyone who visited there told us how thrilled they were to explore the park with some simple directions and instructions, especially when we also told them about some other secret little places to see along the way on their 20 min drive or all day bike ride. There are far more things to do or places to visit on our doorstep in this micro region of Slovenia than even we could possibly have imagined when we were lucky enough to decide to live here!.