Yep.. there's a Volcano Park too! 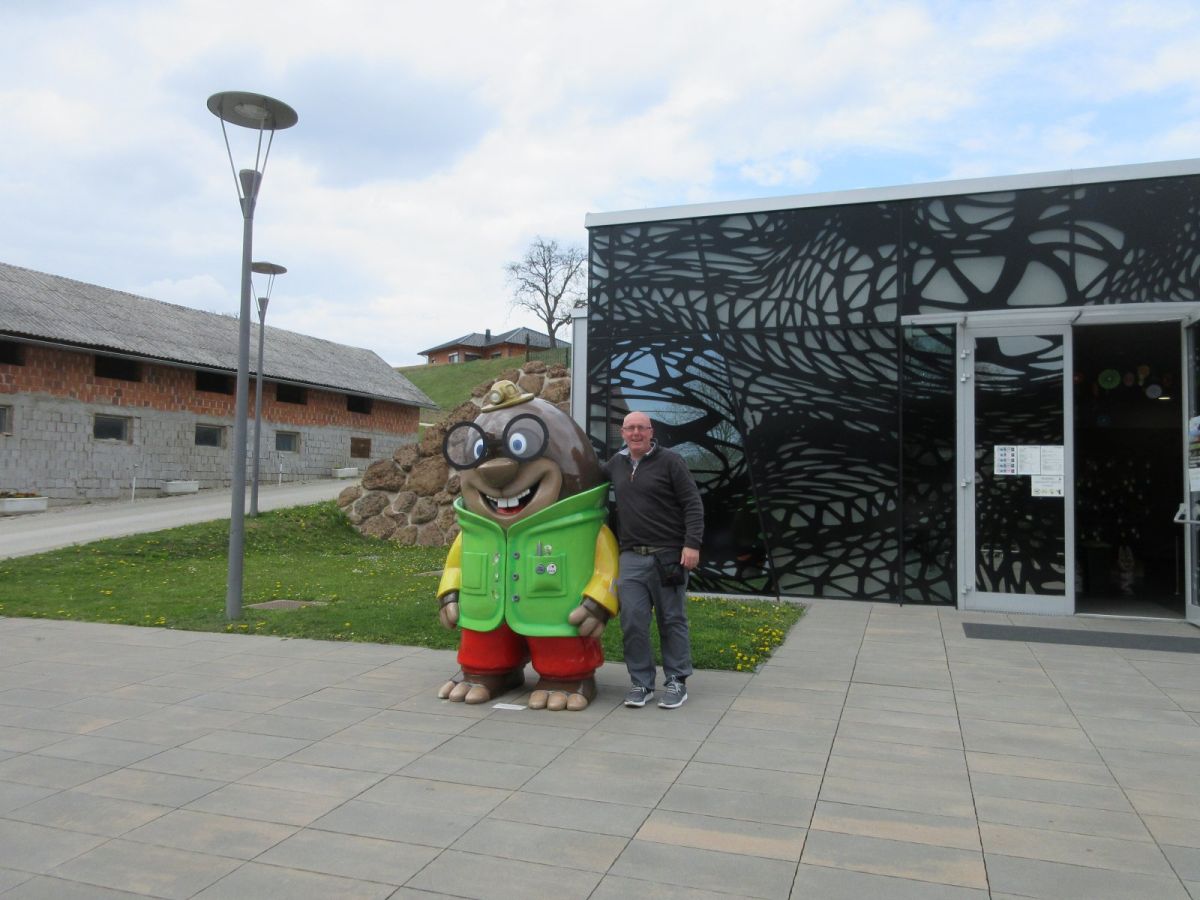 the adventure park have their very own cuddly, furry creature with glasses.. he's the one on the left!!

If you were hoping to catch a glimpse of Slovenia's volcano then you are a couple of million years too late.. but don't despair.. on the site of the volcano they only went and built a fab interactive mini volcano museum to tell you all about it!

This is another of the secret attractions tucked away in the flat north eastern corner of Slovenia, close to a little town called Murska Sobota.. the nearby river being the "Murska" and "Sobota" being Saturday.. so make of that what you will!

We had heard there was a volcano museum somewhere in Slovenia and so several years ago we phoned them to check details, but would you believe it.. the old volcano museum burned down.. you would think they would be a little bit more careful on the site of an old volcano!

Anyway the shiny new one is well and truly built and it is a perfect example of one of Green Slovenia's many micro museums, where 1-2 hours spent here will fill you with info, fun & memories and surprise you with some little things you couldn't have expected!

In Slovenia you can take it for granted that the people will be friendly and kind and the staff here were wonderful. There is even a giant mole called Oli to accompany you around the place. He wears the same green overalls as the staff members, which is a nice, uncheesey touch and as you might expect with a mole.. he pops up everywhere to give you snippets of info!

Cos of the fab motorways in Slovenia, you can even whizz up to Murska Sobota in a little over 2 hours from the Lodge.. so even this corner of the country is a possibility for a day trip.. especially when you know how many other secret places to visit there are on the way here or the way back!

The museum tour is all about the volcano that was on this site and explaining about how volcanoes work. They use lots of great technology and so the info is visual and verbalised from the cuddly, funny, slightly nerdy mole, called Oli.

You get to go through a door and then down, down, down into the ground to feel how a volcano works and the finale is a virtual rollercoaster with Oli.. it's great for all ages and you will have fun, learn a little more about volcanoes and about the local region which is wierd for Slovenia.. being as flat as a pancake!

We also spent the first 5 mins after leaving the museum looking around for buildings that had been built with bits from the volcano.. until we forgot about it!

There is also a great little souvenir shop with various Oli the mole merchandise.. so obvious, but so often missing in Slovenia.. so we got Oli T shirts.. can't remember a cafe, but there is always a nice local restaurant nearby in Slovenia.

They call this place the volcano adventure park and this is a bit of an exageration in size, but for us it is yet another a lovely Slovenian micro museum to entertain and interest you for a few hours. Well done Oli and the team, you are doing a great job!

Be sure to mix your day up in this mini region with a combined visit to the nearby and wonderful Grad Grad.. the castle so big they named it twice! Where else in Europe, other than Slovenia, could you see a volcano park and a fab castle in the same day!